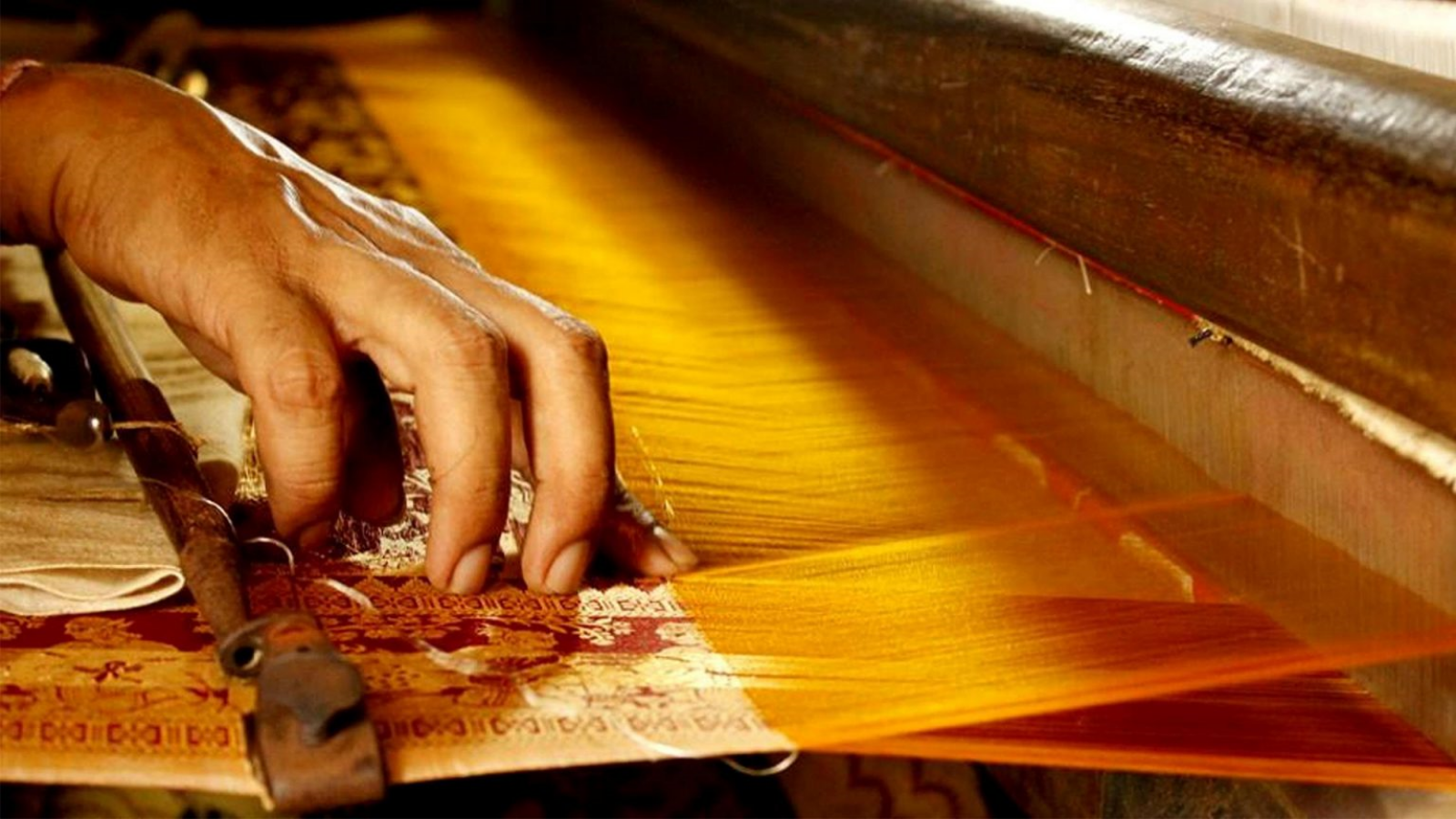 Sualkuchi: The Silk Village of Assam

Just a handful of us may have heard of Sualkuchi, a quaint village not very far from Guwahati, the largest city of Assam. This picturesque village, however, is heaven for silk fabrics, and is known as the ‘Manchester of East’ as well as the ‘Weaving Mecca of Assam.

Situated on the bank of the mighty Brahmaputra River, Sualkuchi offers various silk fabrics to the world, including the golden Muga, ivory white pat, and light beige eri or endi silks.

Historians believe that the silk weaving tradition began in Sualkuchi in the 11th century when king Dharma Pal, of the Pala dynasty, encouraged the craft and brought 26 weaving families from Tantikuchi to Saulkuchi.

The cottage industry later took shape in the mid 17th century when the Shams defeated the Mughals and occupied Sualkuchi. During that period, it was a luxury enjoyed only by the royalty of Assam. Soon the craft flourished, and the natives of this village started experimenting with nature-inspired motifs.

Expert weavers from other districts too started migrating to Sualkuchi. Different types of fabrics like cotton and khadi are also woven, but silk weaving is more prominent in this village.

Today, there are various tiny streets of Sualkuchi, each filled with its own sweet rhythmic sounds of looms and flying shuttles.

Every house has a loom, and you can see weavers busy hand-weaving mekhla chadors, the traditional attire of Assam.

The silk weaving process is an interesting one. First, the desired motifs are drawn on graph paper by the artisan. The motifs are usually inspired by flora and fauna found in Assam, like the peacocks, rhinos, deer, and flowers. Another common motif is the ‘Jaapi’ (traditional Assamese hat).

Once the design is ready, the weaver starts making punched cards. To make a punch card, holes are punched on rectangular cardboard pieces along the lines of the design.

The next six days, sometimes if the design is complex then more, the weaver will spend weaving one saree.

Golden zari was used in the past to create motifs, but it is now replaced with silk and cotton threads.

Sadly, this craft is not appreciated enough by the world, and Sualkuchi does not receive the attention it deserves. The skilled weavers of Assam should not be neglected, but, treasured and promoted.

In fact, many middle men and traders exploit these weavers and not pay them as much as they deserve.

But there are also people by Sriparna Baruah, the head of the Indian Institute of Entrepreneurship (IIE), an autonomous organisation under the Ministry of Skill Development and Entrepreneurship. She works closely with weavers and helps them realise the true market value of their products. Baruah says, “Our endeavour is that the weavers realise the true worth, the market value of their products. We connect them to entrepreneurs, help them participate in international fairs and introduce start-up funds, for instance, 15,000 rupees for a loom.”

MiradorLife has joined hands with her to help Assamese artisans sell their crafts and earn ethically without any middleman cuts. In line with that, MiradorLife is now presenting Weavers Nest, an event on handmade textiles, sarees, and jewellery. The event will help you better understand how North East artisans hand-weave sarees and textiles using organic fabric and natural dyes.

At the event, you can also learn to drape a saree in different styles – from traditional, formal, to casual. Weavers Nest will be organized at the MiradorLife design studio in Bangalore from 17th to 20th October 2019. Click here to register yourself.

Note: If you happen to visit Sualkuchi, do enrol in programmes that take you on a tour of this beautiful village and teach weaving techniques in the village workshops.

Pookolam Designs to make your home look different this Pongal